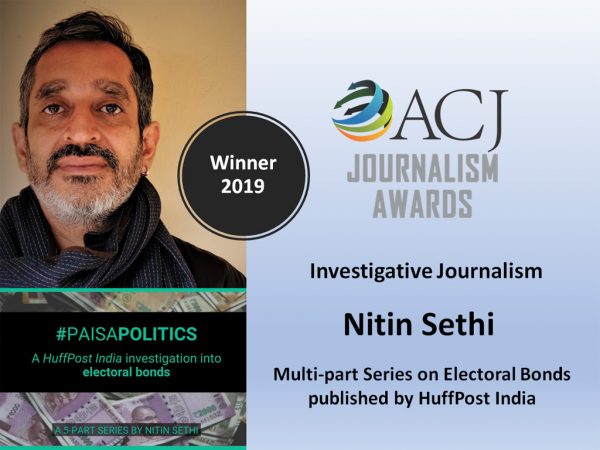 The award, which comprises a trophy, a citation and INR 200,000/- in prize money, was presented to the winner by the Chief Guest Dr. Soumya Swaminathan, Chief Scientist of the World Health Organisation, at the online Commencement Lecture for ACJ Class of 2020-2021.

“This year, the Jury had several outstanding entries to choose from. However, the final entry selected itself for its stunning exposure of how easily an elected government can subvert the checks and balances fundamental to a parliamentary democracy. Nitin Sethi’s six-part investigative series on the Electoral Bonds is an expose in the classic sense. It combines elements of investigation and documentation with paramount public interest.”

“Indeed, the story unearths and establishes facts about the Electoral Bonds scheme that, although previously suspected, remained in the realm of speculation for want of hard evidence. Sethi’s documentation brings out staggering details about how the government pushed through the Bonds in the face of stiff opposition from the Reserve Bank of India and the Election Commission of India, and thereafter went on to expand the scope of the scheme by breaking the rules notified in this regard.”

“In 2018, the Central Government introduced the Electoral Bonds scheme as an innovative and far-reaching measure to curb the use of black money in election funding. However, a key feature of the scheme was the anonymity it provided donors which rendered it opaque and vulnerable to misuse. The RBI was concerned that the Bonds would become bearer instruments that could undermine faith in the bank notes issued by the Central Bank while the ECI flagged the opacity of the scheme and the opportunity it afforded to shell companies to funnel funds to political parties.”

“Sethi’s documentation shows that while the RBI suggested limiting the scope of the Bonds, the Government instead opened more windows to enable purchase of the bonds in close proximity to State elections.”

“Elections are the bedrock of a parliamentary democracy and when the electoral arena is sought to be manipulated and made opaque, it can impinge on democracy itself.  It is in this sense that Sethi’s investigation becomes a public service.  Mention must be made here of the extensive use of  the Right to Information Act and the stellar role played by Commodore Lokesh Batra in procuring many of the documents.”

The efforts of two other journalists earned special mentions. They are (in no particular order) are as follows:

• Rohini Mohan’s work ‘Worse than a death sentence: Inside Assam’s sham trials that could strip millions of citizenship’ that was published in Scroll.in.