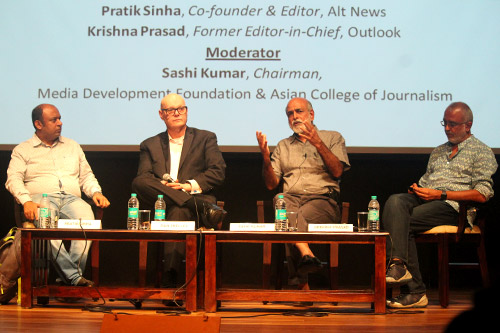 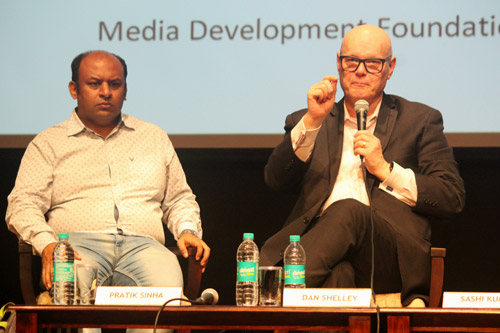 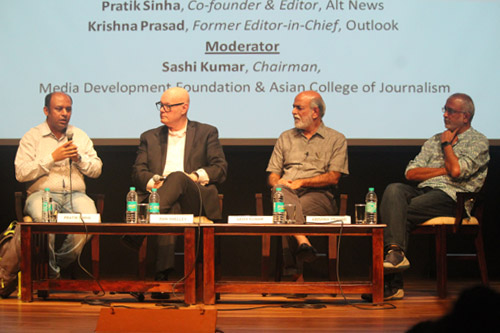 Silent and undeclared curbs on the freedom of the press have led to the slow death of ethical journalism and proliferation of fake news. This was the consenus at a panel discussion on Editorial Leadership in Age of Disinformation at Asian College of Journalism (ACJ) on Tuesday afternoon.

Sashi Kumar, chairman of ACJ, started the panel discussion by drawing attention to the role of the editor in countering disinformation.

Dan Shelley, Executive Director, Radio Television Digital News Association, USA, said that never before had the role of the editor been more important than it was right now. The editor had a role in not just enforcing high ethical standards but also in championing free press.

Krishna Prasad, former Editor-in-chief of Outlook magazine, said the editor alone was not the gatekeeper but rather every reader and journalist should be in the business of separating truth from fake news.

Prateek Sinha, founder and editor of Alt News, a web site that exposes fake news, said crowdfunding could help media houses protect and encourage the veracity of information. In media houses that depended on advertising revenue, the government could bully a big investor and force editorial decisions which the editor might not necessarily otherwise make.

Shelley said that in the US there were organizations that policed the media but they were influenced by their ideologies.

Krishna Prasad said that today the media was driven by a profit motive overriding everything else. In the rush for eyeballs, the journalist no longer invested in credibility.

Krishna Prasad compared the present day situation in Kashmir with the Emergency of 1975. He said there was an unacknowledged emergency in India with the forceful silencing of the press.

Prasad added that the media in India were either silenced or forced to be complicit with the government.

Talking about editors and leadership, Prasad said there was excess of one and a scarcity of the other, and it was up to people to decide what they wanted more of.