As part of ‘how to’ aspect, in the beginning, Semester One will have foundation courses that will ensure that the students get the basics right in Reporting, Writing and Production across  the different platforms using text, photographs, multimedia elements and audio and video.

This will be followed by intermediate level courses in Semester Two with modules to reinforce skills to enable students to produce output across platforms fit to be presented in the public domain. 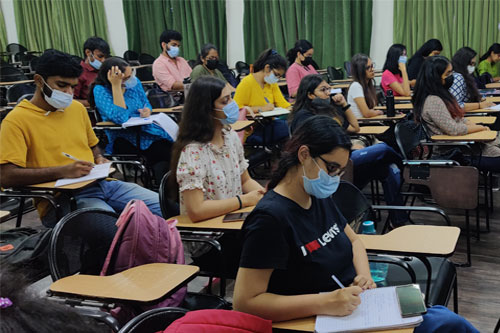 As part of the Covering Deprivation module, in a culmination of the skills acquired, students report, edit and produce a special broadsheet or a website or an audio-visual docufeature with the information gathered during field trips to villages in remote corners of the country.

Solutions Journalism, which will enable journalists to go beyond just reporting problems and look at solutions to those problems, will be integrated into existing modules across two semesters

In the second semester, students will choose one of the following three Concentrations: 1. Text and Graphics Plus 2. Mojo and Immersive Tech Plus and 3.Video and Audio Plus.

The semester will be advanced in terms of the scale and complexity of news gathering and production skills and include hands-on projects. Students will also undertake an investigative project in their respective chosen concentration.

Towards the end of the semester, students have to submit their Dissertation on a topic requiring extensive secondary research and some field work. The work would have started in the middle of the first semester, with faculty members advising students on topics and supervising the research and writing. Students defend their dissertation in a viva voice session.

This intellectually-demanding course deals with substantive issues of current relevance. Students are expected to read and discuss in class a set of readings by M.K. Gandhi, V.D. Savarkar, B.R. Ambedkar, Jawaharlal Nehru, Rabindranath Tagore, Martin Luther King, Rammohan Roy, Tarabai Shinde, Periyar, Islamic feminists, Karl Marx and Friedrich Engels. The readings will also include a Socratic dialogue, a Federalist Paper, and the Declaration of the Rights of Man in revolutionary France. There will be short presentations in class by all students based on these readings. The course will end with an open-book exam. The idea of this course is to encourage students to read some basic texts that will widen their horizons and help them raise the right questions as professional journalists. 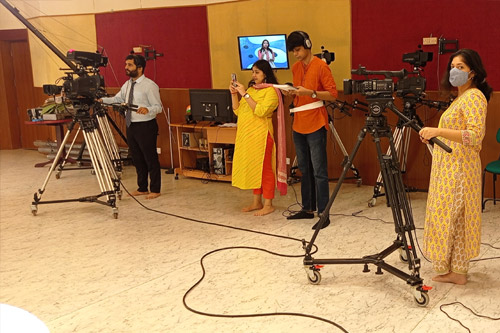 This course is designed to give young entrants into journalism a sense of the history and characteristics of the news media, and of their possible future development. The areas covered include the press and the independence movement, and movements for social reform and transformation; the growth of the media from the once-separate print, broadcast, and new media platforms to the current convergent multi-platform entities and their relationship to the development of capitalism (up to the present era of globalisation); the explicit and implicit forms of censorship operating on the news media; the explosive growth of television following the Direct Broadcast Satellite revolution; the impact of global media giants on news production and dissemination; the influence of the Internet and the New Media on the context and practice of journalism; and the impact of convergence, digitisation and vertical integration in the news media.

The course helps students understand different aspects of their future profession. Subjects include the role of journalists in society, the ethical decisions they are called upon to make, the value of media diversity and pluralism, the effects of concentration of media ownership, and the impact of technological change.

TOOLS OF THE MODERN JOURNALIST

Technological transformation and other developments in society and the economy bring about profound changes in work practice, making new demands on the capabilities and equipment of contemporary journalists. Included in this course are segments on Photojournalism; News and Numbers; and Sourcing Information.

In the Photojournalism course, among several other things, students learn about camera basics and the factors to be kept in mind for a photo-shoot. They will also study the works of well-known photo-journalists and learn about the different genres of photography.

The News and Numbers course introduces students to the statistical principles which underlie the numbers used in the media. Students get an understanding of how data is collected, interpreted and presented. They pick up the ability to analyse and evaluate numerical data.

Under Sourcing Information, students learn how to identify and cultivate sources; pick up tips from reliable sources for possible scoops; and evaluate leaks from disgruntled employees and whistleblowers. They learn the importance of analysing data in documents and to carefully look for gaps and inconsistencies.

THE MEDIA, LAW AND SOCIETY

This course considers a whole range of laws that apply to the various media in India, focusing on their impact on the media. Special attention is given to the freedoms guaranteed under Article 19 of the Constitution and to concerns of restrictions on freedom of speech and expression. Students from abroad are encouraged to examine the difference between Indian laws and similar laws in their own countries. The course also serves to introduce students to courtroom and police station procedures.