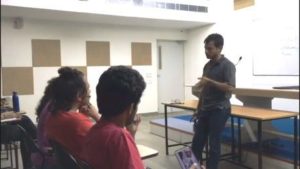 The burning question of the Rohingya refugees was debated by the students of Asian College of Journalism at the first ever debate hosted by the ACJ Debate Club this evening.

India has accepted refugees from Sri Lanka and Tibet in the past. Should India then be accepting Rohingya refugees? Or should India pressure Myanmar into stopping ethnic cleansing and accepting the Rohnigyas back?

If India aims to be superpower, India should lead by example and stand for human rights in the subcontinent. At the same time, the condition of existing refugees in India is not great, especially Sri Lankans. Is India taking on a problem it cannot solve?

The audience members too questioned the debaters and put up fresh points. SAF scholars at ACJ also participated in the debate.